Let's Grow Your Business with Heart!
At Reina + Co, we help creatives like you who have all the ideas and want help focusing on the most important things. We want to empower you with the tools you need to take decisive action that will help you to grow a business that's Fueled with Heart.
May
25
2016
Creative Entrepreneur 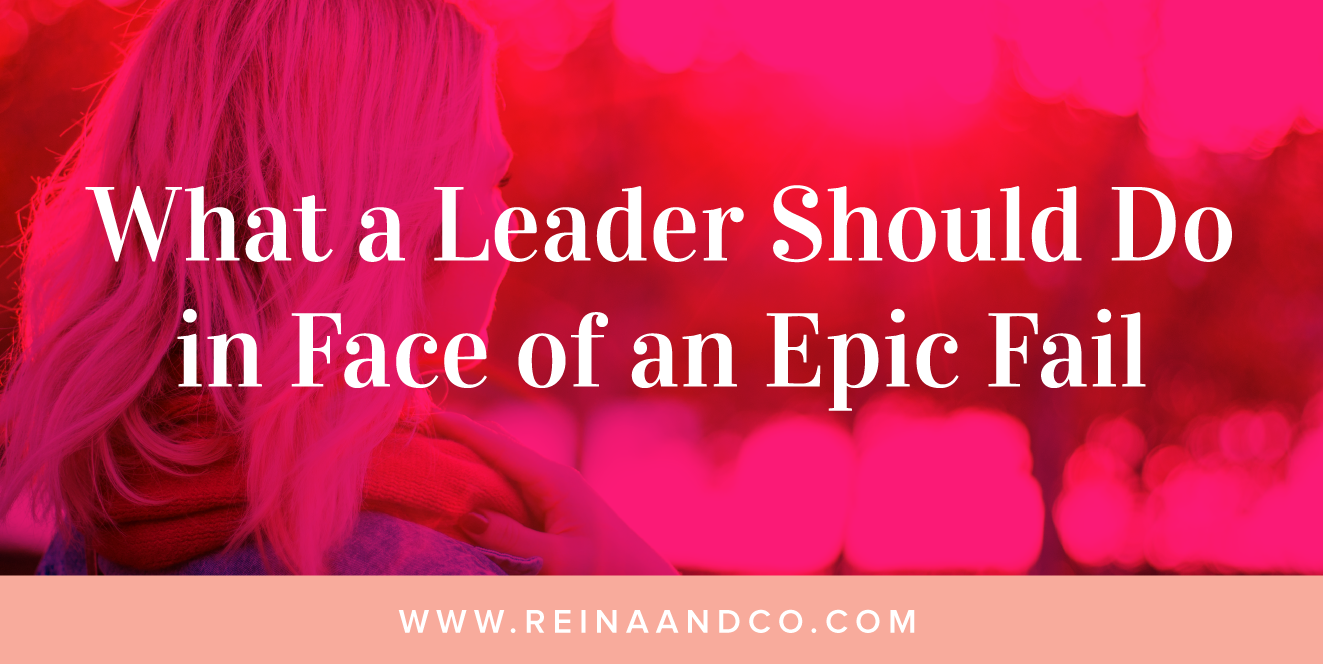 It is tough to fail, but when you do it publicly, it’s like falling face-first in the high school cafeteria in front of the cool kids. HUMILIATING.

I’ve had other kinds of fails. Where I put out an offer and nobody nibbled. I asked somebody to partner with me and they gave me a less than gentle no.

This week, you might have been on the receiving end of some redundant emails from my email system. To keep the #emailapocalypse2016 catastrophe brief, we moved to a new system, merged some lists, did some magic and somehow, broke the system. One thing that happened was a Reina + Co mistake, while the rest was a freak error by the email system provider.

The end result, however, was that people on our list received some things that they didn’t ask for or weren’t expecting (and a few too many of them). And, the wrath of the internet is real. People jumped off of our list in droves. They left parting words for us that ranged from minor, to mean, to downright hurtful, some saying I was a “worthless coach,” who essentially wouldn’t amount to much. ZING. Man, that stuff stings, because I’ve said those things to myself but I’m so much meaner. Aren’t you the meanest critic of yourself?? But I digress.

I learned a few key lessons this week that I wanted to share with you. This isn’t a comprehensive list of all things a leader could do, but rather a reflection of the things I did or things I chose to do that made the experience manageable.

This is so simple and so difficult. Dismantle your ego and tell your audience, “I’m sorry I made a mistake. I’m not perfect and I hope you’ll accept my apology.” Those who are “your audience” will stick along and respect you for the brave decision you make. Those who are annoyed probably won’t see the message because they’ve already left the crowd. Either way, apologizing helps to connect you with your crowd, so they understand where your heart is. Where there’s a reason to say sorry, do so – in business and in life!

This one is a hard one for me. As a recovering people pleaser, I want to make sure I haven’t offended anybody. Well, as a business owner, that’s not going to happen. You can’t make everybody happy. The mean things that people say about you aren’t true. As my mentor and friend, Heather Crabtree says is “if you have haters, it means you made it to the big leagues, welcome.” HA! And if you’re doing something big and different enough, you’re going to trigger some kind of negative emotion in somebody else. It’s just an exercise of filtering out the people who are “your tribe” vs. people who might not have belonged there in the first place.

3. Grow a team when the seas are calm.

If I didn’t have a team last week while the seas were calm, I don’t know if I’d be standing right now. I couldn’t encourage this enough. If things are going “smoothly” for you in business, now is the time to build a business, not when “you need people desperately.” When you’re level-headed, you can see different perspectives, you can make a more logical decision, you can think clearly.

Without my team (and especially Rachel) last week, you would have seen me in a puddle of my own tears, unable to move, much less try to fix the issue that we were dealing with! A healthy team is invested in getting the whole unit (in this case Reina + Co) through the debacle so that it can be a stronger, more unified unit at the end of the storm.

That unit can be people who you hire to be part of your team, people who are part of a mastermind, people who are business besties, your IRL bestie, your partner,  your roommate… But build those relationships up so that when you need to tap into them, they’re willing to help you out.

This part has never been easy for me. Vulnerability always makes me nervous, but I learned that I adore people more when they show their mistakes, their vulnerability because to me, that shows their courage. In this debacle, I’ve learned to share my mistakes openly, in hopes that it would inspire others to see that things aren’t always peachy keen behind the scenes at Reina + Co. Transparency, and the grace that comes from people who “get you” helps to heal you from the burns of humiliation. The notes, love, and outpouring of support only came to me (thank you everybody who sent me a note or called) because I was willing to open up at every step in the process. It was a terrible mess and I was grateful to hear that it gave others courage to be more vulnerable in their leadership

I don’t know that this #emailapocalypse2016 was really a Fail Forward situation, but in other instances where I’ve put things out into the world and discovered that people didn’t want what I had to offer was a definite fail forward moment. The thought about fail forward, fail fast is to keep taking forward action so you make mistakes that lead to “the next thing” in your business. Without those mistakes, often the evolution of your business doesn’t happen. It’s not an issue to make a mistake or fail, it’s the growing pain that ultimately allows for us to be the fully actualized version of our businesses!

A word for perfectionists who might be freaking out reading this… without failure, you’re not really growing. If you don’t put anything out into the world because you’re fearful of it being perceived as less than perfect, notice that fear and take small steps forward to putting your work (and little pieces of your soul) out into the world.

6. Extend grace to even the meanest of them.

When people are mean to you, I’ve learned, it’s rarely about you. You may have triggered that mean response, but it’s really about the mean person’s general disgruntled-ness in the world. As you would hope for receiving grace from your community, extend the same grace (it’s SO SO HARD!) to the people who are rude, mean, hateful toward you. They mean it, but you’re just the default recipient of the negative energy that they could be projecting elsewhere. Like I always say, people just want to be seen, heard, understood. Anger makes people feel powerful and have control, whereas in other parts of their lives, they might not feel that way.

7. Take time to reflect and regroup.

When failures happen, don’t be fooled that it’s might not be so easy to pick yourself up. It’s okay if you’re finding yourself in a literal or proverbial puddle of your own tears. When you come down from the intense frustration and disappointment, know that you still are enough. Know that you have SO MUCH to offer the world. Know that people still need to hear your voice.

Take time to take care of your heart. Heal what it needs to heal. Whether that means taking a week or so off of social media, or only working on client projects and nothing else, make sure that you’re taking care of you.

Know that this failure doesn’t define you. In fact, in a few years, you’ll probably look back and laugh about what a crappy situation it was, but how you got over it! The epic fail is just a bump on the (what I hope will be a)  long road of entrepreneurship.

Take time to think about how you want to communicate what happened and what you hope to do moving forward with your team. Your team needs to hear from its leader in learning how to make decisions, to do better next time, and to also hear praise and acknowledgements for how they stepped up during a fail. 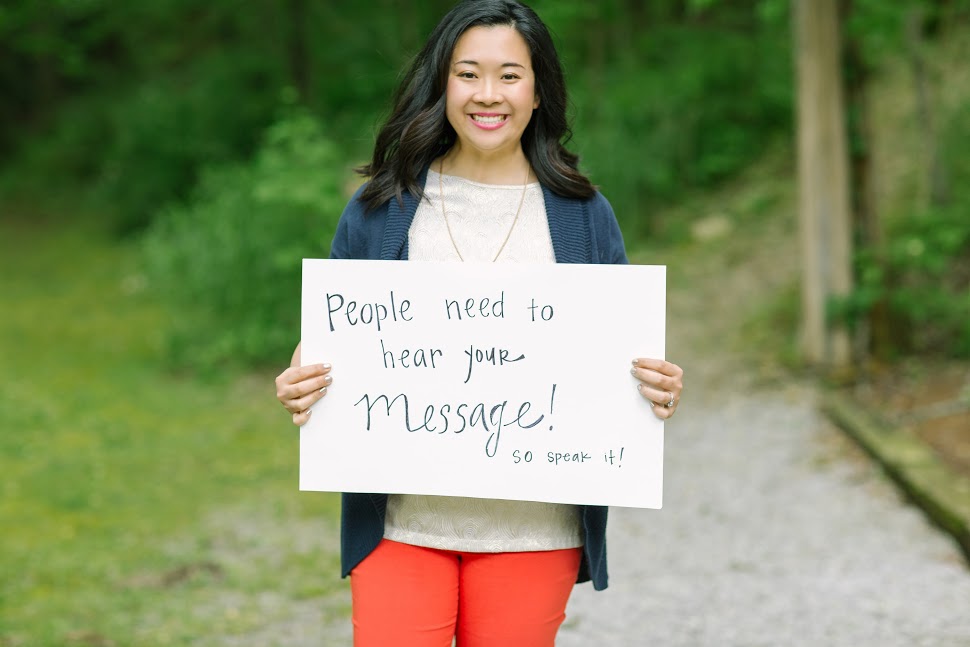 I hope you might have gained insight from my experiences last week!