Let's Grow Your Business with Heart!
At Reina + Co, we help creatives like you who have all the ideas and want help focusing on the most important things. We want to empower you with the tools you need to take decisive action that will help you to grow a business that's Fueled with Heart.
October
4
2017
GOAL-SETTING + PRODUCTIVITY

When it comes to executing all of your projects, it takes a lot to get everything done. Many people who are creative entrepreneurs, I would describe as “visionaries” or “big picture thinkers”. You could sell all your ideas and make a million bucks! But how do you go about selecting which ones are worth it right now?

I’m sharing some tips with you to make sure that you are choosing the right ideas to focus on, so you can make the most impact in your business. It’s truly a gift to have so many ideas! However, I think the most impactful, successful entrepreneurs are the ones who have an idea and really pursue it wholeheartedly—instead of doing things piecemeal and attempting to focus on too many ideas all at once.

What happens is, when you make incremental progress on all your projects, it’s a very slow process. If you focus all of your attention—or even most of your attention—on one project, it’ll be completed earlier and with more attention to detail. By doing this you’re making better progress, you’re making money (hopefully!) on these projects and you’re able to further your business successfully at that pace.

You have to buy into the notion that trying one thing and focusing on it is the solution for you. It can be really hard, but there are three things that I want you to consider that might make it a little easier. When you’re looking to find focus on what project you’re going to work on next, consider the following tips. 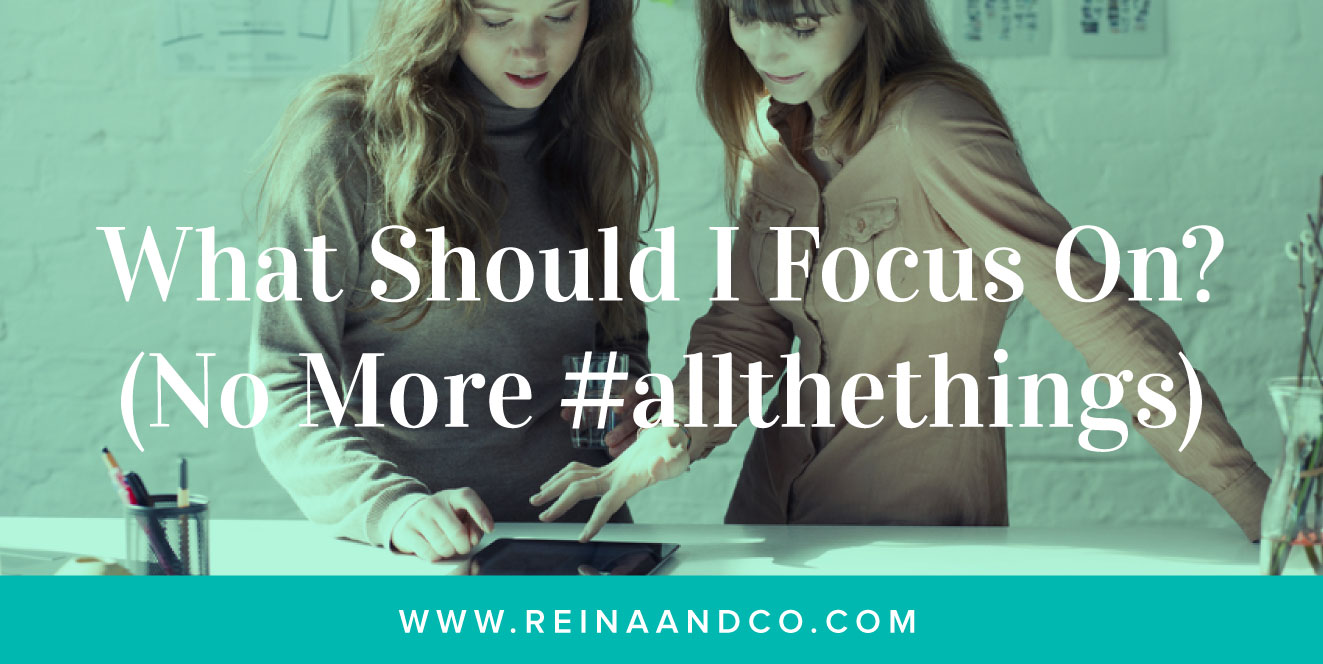 CHECK POINT 1: Do you need to make money right now?

This might sound silly but it’s an important question. A lot of projects that I see people doing—like styled wedding shoots or passion projects—don’t have any money coming in. Is money important? Because if it is, then you have to prioritize your money making ideas. They can still be fun! But they have to be something that brings in money. And, no, not just things that would be ‘cool’ if it brought in money, but validated ideas where somebody is actually handing over money to you to create something or be a part of something.


If you have the means and the funds to do it, of course take on a passion project! If you don’t have any initial plans on how to start making money and monetizing it, that’s okay because you already have a seed fund, essentially, from having your money come from your main service or product.

However, what I want you to consider about this passion project is, does it fuel you? If it hits both money and passion, that’s even better! We all love doing projects like that. But we want to make sure that the passion ones come secondary to the money projects—if money is more of a priority right now.

Let’s be really honest: money is always going to be a priority. It’s important to be able to make money, to have a successful business and to survive. Yet, it’s not everything. Passion is still important. To be able to feel inspired and encouraged by something you’re working on? That’s so important.

what I want you to consider about this passion project is, does it fuel you?

CHECK POINT 3: The time and resources it’s going to take to bring this project to completion.

So, like we were talking about earlier, there are a lot of projects that are going to require investing and other resources external to you and your time. If you’re using too much of your time and energy on one project when it could be allocated to a moneymaker, it’s something you need to consider changing. You need to look at what resources are going to need to be tapped in order for this project to come to completion.

CHECK POINT 4: What impact are you looking to create?

What is the change you want to see as a result of your project? Is it going to be fulfilled? Impact is all about change. So, maybe it’s a styled photo shoot and the impact that you wanted to make is that you will be featured for the first time on Style Me Pretty. That feature could garner more clients for you and get more eyes on your stuff. To be able to say that you were featured on Style Me Pretty is important to you. That is impact. If that is a priority for you, that is worth investing in—your time, energy and money.

However, if the impact you want to make doesn’t align with the results that you expect to get, then that’s something to evaluate. Impact can also be considered your goal. For example, if you say you’d like to make $5,000 off of the e-product you created, but you have no way of selling it. Or you have no way of marketing it because you have a small audience. Then maybe setting your sights on this goal is nearly impossible and you’re just setting yourself up for failure.

Maybe you’ve spent so much time putting a course together—and then you hear crickets. That’s not the kind of impact you want to make. It’s important to think about the result that you need to see after all of the time, energy and money you’re spending on creating this.

I see this often with course creators. A lot of people will tell them their idea is so great and that they want this, but having people say they love something and having them actually pay money for it are two completely different things. You really need to validate your idea first and then sell it to somebody before you actually create the content.

You really need to validate your idea first and then sell it to somebody before you actually create the content.

At the end of the day, you want to make money and prioritize your profit.

I often talk about people and relationships over profit, and that is absolutely imperative. You have to know that the product you’re creating is ‘people’ centered, not ‘profit’ centered. We can’t lose sight of that! But really this is all about helping you decide which projects to focus on. If you can’t decide, try and think about which one is going to make you money at the end of the day.

We are in it to serve others but you can’t serve others as a business if you’re not making money. Otherwise you’re a non-profit, or a charity.

I want you to be a well-rounded entrepreneur. If your focus is on cultivating your inspiration, passions and hobbies, that’s okay. However, make sure that comes after choosing to prioritize being in business to make money.

As you’re thinking about your next project I want you to think about what your priorities are. What is the thing that you’re putting front and centre? Is your time important? Maybe you’re a mom and don’t have a lot of time to spare. Maybe it’s important for you to hustle right now so you can take maternity leave. Or maybe it’s important for you to get out of your 9-to-5 so you have to make some extra money. Money is not a bad thing.

Money is not a bad thing.

Park some of your ideas and come back to them later.

Finally, I want to encourage you to think about parking your extra ideas in a place that you’ll be able to remember and come back to. I have a ‘parking lot’ and my rule is no idea is a bad idea but all ideas have to be a parked idea. What I mean by this is, I have to ‘park’ ideas that come to me if I don’t have the time to work on them. I can always come back to them in a couple months and either love it or admit that it doesn’t really make sense for where I’m at right now.

Also, when you’re parking your ideas, make sure that you’re writing them digitally or in a notebook and not just on a Post-It somewhere. You want to be able to know where they are so you can easily come back to them. A lot of people will use Trello for this, I use Google Docs. But wherever you’re going to put it, ensure it’s going to be safe!

I want you to be able to say yes to the right things!

Now, let’s make it a little easier for you!

I know that projects, creating timelines and competing ideas can be really difficult. But we have some tools to actually get you to that place. If you’ve been thinking that you’re serious about your idea and you’re ready to run with it starting in, let’s say, a month—what do you need to do to get ready for that? Let’s admit it, this throwing-spaghetti-against-the-wall-thing isn’t working!

How do you make sure the project you set out to do actually gets done? Well, we have something for you. Your Next Big Think Challenge is here! It’s free and you can jump on in and tackle your tasks in a 4-day challenge  where we’ll be breaking down your next big project. We’ll figure out how it’s going to shake out and how you’ll get to execution so you can get to the impact you hope to make with this project. 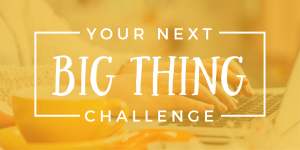 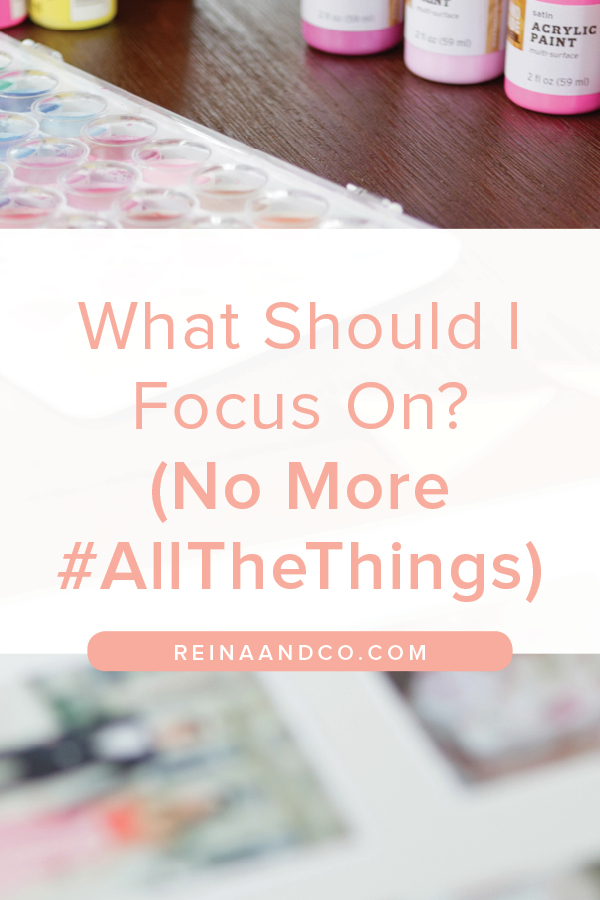