Let's Grow Your Business with Heart!
At Reina + Co, we help creatives like you who have all the ideas and want help focusing on the most important things. We want to empower you with the tools you need to take decisive action that will help you to grow a business that's Fueled with Heart.
August
3
2016
Creative Entrepreneur 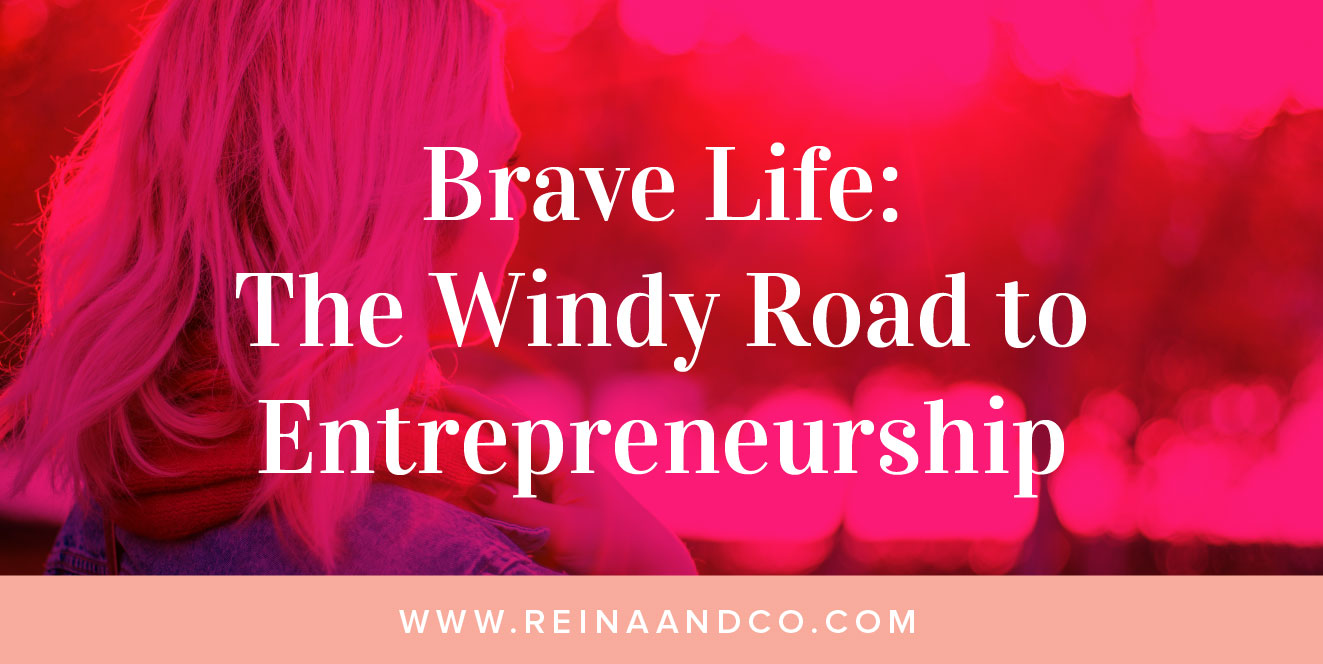 If you’re an entrepreneur you’ve already chosen the Brave Life.

If you’re the most of North Americans, you were probably raised through the school system, going from elementary school to middle school, high school, possibly college and graduate school. I’d venture to guess that the expectation was for you to graduate and go get a job and start your career.

If you were anything like me, you didn’t see an alternate path, you just saw the one that was paved ahead. I was supposed to go to law school. I was supposed to become an attorney and making gobs of money in corporate. My heart and my life had different plans.

When you’re a creative, by default you’re on an indirect, long and windy path. It’s hard to make plans because your next step might come from a turn you take along the way. All the choices you made determines where you end up.

There are no mistakes in where you’re led

For a long time, I doubted myself. I felt like the big decisions I’d make were disappointing everybody I knew. It also felt like I was lost. I didn’t have a clear cut path any more and felt a little listless. When I found Social Work, I learned that my calling was to help people; I wanted to be able to see people, understand people, to validate their experiences. I started my wedding planning business because I needed a creative outlet. But I left that to be a full time mom. Then I started my business.  I thought that my lot in life, my personality was that I didn’t have gumption, that I didn’t have what it takes, that I’m a quitter.

I’m not a quitter. And neither are you.

In any part of your journey, whether you’ve “arrived” at a happy destination, or you’re still at humble beginnings, know that there are no mistakes in the paths that lead you to each stage. There’s a lesson here, right where we are.

There are on mistakes in the paths that you lead you to each stage. There’s a lesson here. @reinaandco

Nobody knows where they’re going

Christina Scalera and I host the Creative Empire Podcast together and we’ve spoken to dozens of women whose success I’ve looked up to. So many of them have said that they had no idea what they were doing, or that they stumbled on “the thing” and were trying to figure out what they were doing one day at a time. This is encouraging when we feel totally lost – even the experts feel like they were in the dark on their journey to their success.

When you see people’s social media and you’re comparing your dismal looking life to the women you look up to, remember that you’re just looking at a highlight reel. You’re not seeing the times of discouragement, desperation and loneliness. We all have to figure out our own paths and there’s a ton of hope in that!

You’re more courageous than most of the world

By becoming an entrepreneur, you’re more courageous than most of the world. I say this incredibly bold statement and here’s my justification: While it’s not easy to have a job and work hard, working for somebody else, making mistakes on somebody else’s dime, having that kind of supervision and structure is the safer, more stable option.

Our parents might have cringed when we told them that we were becoming entrepreneurs who had big hopes and dreams – because it’s terrifying. There’s no roadmap or guidebook that says, “welcome, here’s the path you should take.” Entrepreneurship is like walking a tightrope across a steep valley. People are watching, many don’t have the guts to try, and you may not make it across. How it’s not like the tightrope example is that it’s possible to get across with a few magic ingredients (friends, a plan, and taking the risk in the first place).

Most people won’t “get” what you’re doing

My family, my in-laws, my IRL friends don’t quite get what I do. I think most of them have caught up to speed that I work for myself, but I think they think that I’m kind of like a starving artist. They might not know that I love what I do, I’ve grown quickly, that I have a team of my own.

And while we can complain, grumble, and feel frustrated that they don’t understand, it’s our job to tell them. If we want people to get what we’re up to, we have to be willing to talk about it, tell them the good stuff, the bad stuff, and the things in between. To explain how life might be different since you started your business.

Failing isn’t the end, should you so choose

One of the marks of being a brave leader of your business is that you are able to take decisive action. There are a thousand choices we have to make in our businesses. If you hem and haw over the small things, we’ll never be able to make progress. Failing isn’t the end. Failing is a part of the process. I love this video of Sara Blakely of Spanx from a 2013 interview (you’ll see her talking about this around 10:30) talking about the benefit of reframing failing as part of the process – if you aren’t failing, you aren’t trying!

If you take a tumble, it’s not the end. Set your sights on taking calculated risk, and make moves, knowing how you might, in fact, fail.